Sat 1/18: Do Something Saturdays are Cancelled and will be rescheduled. Saturday Only Campuses are Closed. See You Sunday.

Superbowl 50
I’m as old as the Superbowl! It only took me 50 years to notice that the roman numerals used to delineate the number of occurrences of the game were the same as my age – who knew? I’m also a Redskins fan, so it has been a tough quarter century! I still watch the season finale with some interest but I have gotten used to paying as much attention to the commercials as the game. This year I was enthralled with the most creatively confusing, disturbingly memorable commercial I can ever recall. I’m referring, of course to Puppy Monkey Baby.
The ad for a new Mountain Dew beverage features a computer generated character that combines the head of a puppy, the body of a monkey and the legs and feet of a baby. This bizarre creature dances around a living room repeating its name until the 3 guys in the room join in the dance. 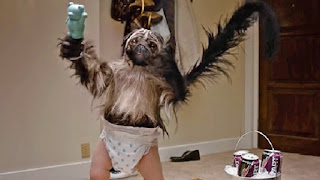 Three Awesome Things Combined
The acclaimed commercial was introducing Kick Start; Mt Dew’s new beverage that combines, in their estimation, three awesome things- Dew, juice and caffeine. Never mind that it also contains brominated vegetable oil that can also be used as a flame retardant and is allegedly banned in several countries. Let’s stick to the awesome ingredients. Puppies, monkeys and babies are all used regularly in some of the most memorable Superbowl ads. But mashing them together caused all kinds of reactions. From horrifying to weird to genius the experts just don’t know how to describe Puppy monkey baby.

Three Person God
The Trinity is the Christian doctrine that explains God’s existence as one nature but three persons. God The Father, God The Son and God The Holy Spirit are all God but three distinct persons. The Trinity is not a “mashup” like Puppy baby monkey but rather a completely unique hard to explain relationship that has existed forever (even the “existed forever part by itself is hard to get your mind around!). As difficult as the Trinity might be to comprehend it is equally as critical to describe two central principles of the Christian faith.
First, the fact that God has always existed in the Trinitarian form means that God did not need to create anything or anyone else in order to love. From the very beginning The Father loved the Son and Spirit loved the Father and the Son and…well you get the idea! There was no incompleteness in His existence from the beginning of time and therefore our creation was not out of necessity, to address some unmet need to love, but rather to extend what was perfect and complete within God already. Imagine God saying this love is so fantastic I have to share it! That represents the heart of God in creating you. Second, as beings created in the image of God we have all been hardwired to live in relationships. Central to what it means to be human is to be a part of a community. The Bible explains that although no one has ever seen God He reveals Himself in three ways; in Jesus bodily representation, in His word and in our relationships (1John 4:12) Three awesome things revealing Three Person God!